Pioneering die-cutting and creasing technology for the packaging industry

Corrusystems is the proud representative of Asahi die-cutting machines for the packaging industry. Asahi Machinery, founded in 1917 under the name Asahi Ironworks, specializes in the production of paper processing machines and started the development of an automatic die-cutter for cardboard in 1967.

This first die-cutter, the Cartonmaster, launched in 1971 and was the predecessor of Asahi’s current die-cutters. Various paper and cardboard machines followed, and Asahi’s machine die-cutting technique got better and better.

In 1995, Asahi’s push-type synchro cutter was the first die-cutter to make sharp, very precise cuts, until then impossible with conventional models. In addition, the advanced features of this cutter significantly shortened set-up times. This led to an enormous improvement in quality and productivity in the packaging industry. As a reward, Asahi won the Sasaki Award from the Japan TAPPI in 1995.

Today, Asahi Machinery, with operations in Japan, Korea, China, Germany, and England, produces many machines for the paper converting, packaging, and printing industries. Of course, Asahi continues to develop and perfect its automatic die-cutting technique.

With an extensive line of die-cutting equipment, Asahi meets every need in the packaging industry. Through continuous innovation and unprecedented quality, Asahi sets the standard in die-cutting precision, speed, and ease of use.

View our range of Asahi die-cutters here and get in touch to discuss your production requirements. I would be pleased to advise you. 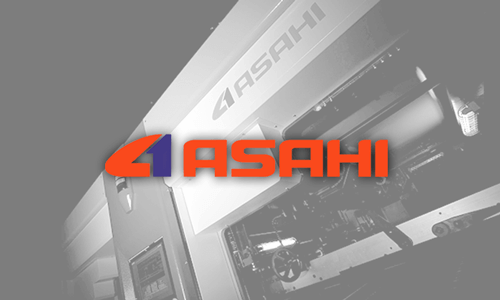 How can I help you today?

Do you have questions about our product range, improving your production process, or new techniques? Or are you considering expanding your equipment? Contact me today, I will be happy to help you!

Decide which cookies you want to allow. You can change these settings at any time. However, this can result in some functions no longer being available. For information on deleting the cookies, please consult your browser’s help function. Learn more about the cookies we use.

With the slider, you can enable or disable different types of cookies: